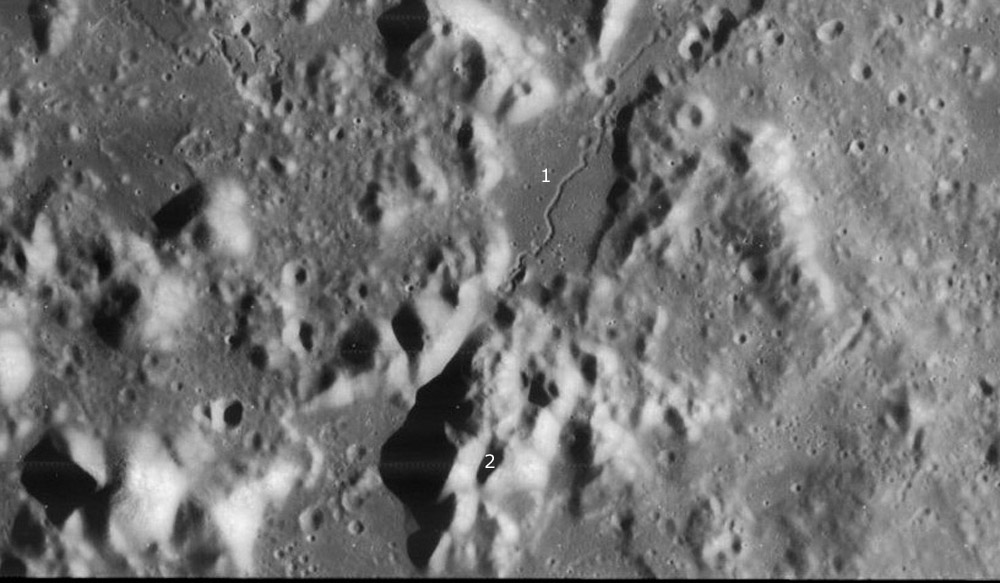 The Alpine Valley is a unique feature on the Moon. Because it is radial to the Imbrium Basin its origin is often assumed to be related to the basin-forming event. But exactly how has never been certain. Most ideas focus on its roughly parallel edges and suggest that it is a graben formed by the collapse of a trough along two facing fault scarps. But why haven't other giant troughs formed radial to other basins? Phil Morgan has a new idea. In the just released issue of the BAA's The New Moon he proposes that the Alpine Valley is a giant sinuous rille. He argues that "the opposing sides of of the supposed fault are deeply crenulated and scalloped", rather than straight and clean cut as he would expect faults to be. Noting that Schröter's Valley on the Aristarchus Plateau has an inner sinuous rille, as does the Alpine Valley, Phil proposes that the Alpine Valley, like Schröter's is a giant sinuous rille. This allows him to interpret the amphitheater at the Imbrium end of the AV as the tadpole-shaped source vent for the sinuous rille; this is the equivalent of the Cobra Head in SV. The crenulations along the edges of the AV are places where the original rille meandered around the mountainous blocks of the lunar Alpes. Phil suggests that the source vent for the smaller sinuous rille that runs down the middle of the AV is a depression near the summit of one of the massive mountains - the Guardians - at the Imbrium end of the Valley. All of these new interpretations will be controversial, but we owe Phil thanks for refocusing attention on an important structure that is poorly understood.