A Row of Domes Along a Rille Line 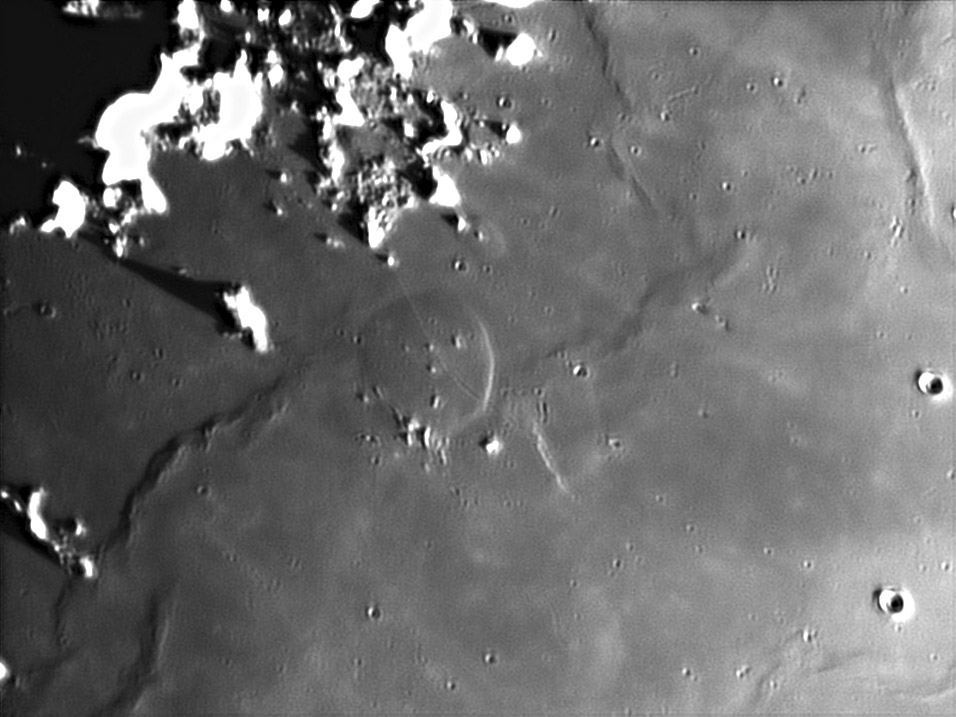 Alika Herring named this broad, nearly flat feature the Valentine Dome back in the mid-1960s. With lower resolution and south up it does look somewhat heart-shaped but as Jordi's image demonstrates it is roughly round, and if it were a heart it has been broken by the narrow rille that diagonally cuts it. This low illumination brings to question the relationship between the dome and adjacent mare ridges. The Gast Ridge from the bottom left appears to continue to the upper right of the dome (and seems to even more so on the 21st Century Atlas plate B5), but is offset 30 km by the dome. Mare ridges are interpreted as low angle thrust faults - where one slab of lava moves almost horizontally over an adjacent piece - and you might think that the faults would be conduits to the surface for rising magma, but that is rarely observed; perhaps because the faulting occurs after the lavas completely cool and become brittle. But here the occurrence of a major dome on the ridge, and its cutting by rilles - almost at right angles to the ridge direction - suggests that magma was associated with the ridges. Near bottom right a brightening is associated with another flat dome, about the same width and height (120 m, thanks LRO QuickMap) as the Valentine Dome. And going in the opposite direction, following the rille towards the upper left there is a smaller dome (about 85 m high and 6-7 km wide) on the same line. The false Valentine Dome at bottom right is cut by a rille, barely seen here but clear in QuickMap, as is the small dome at top left. Clearly, there is a long fissure marked by these rilles and piles of basalt we call domes.

Chuck Wood
Personal Note: I am amazed at what came out during the writing of this LPOD. I started thinking that it was an interesting picture but I didn't know what I'd say about it; and by the end I had seen things that I had never noticed so clearly before. LPOD images are stimulating!

Additional Note: If your spouse/parent or child doesn't know what to get you for Christmas here is a hint.