No Difference in Rays 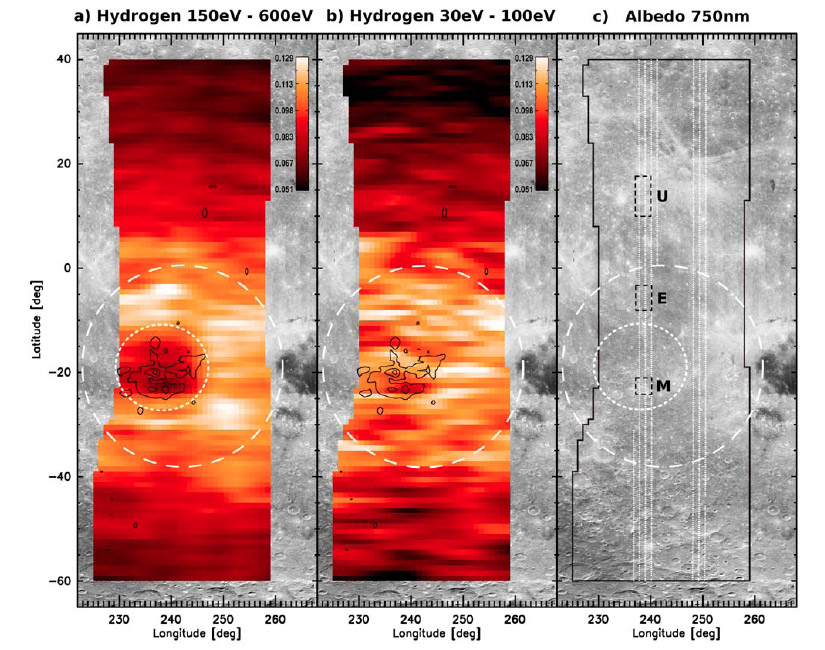 image by Weiser and colleagues, 2010

Looking like an infrared image of a gas giant, the left two images are actually depictions of reflected hydrogen atoms that originally hit the Moon as the solar wind. The red areas have the normal amount of absorbed and reflected solar wind, the outlined areas in the center of the circle have very reduced reflection of hydrogen, and the bright surrounding region has more than normal. This area, near the crater Gerasimovic, beyond the farside shores of the Orientale Basin, is nearly anti-podal to the Crisium Basin and has a strong magnetic field which deflects the solar wind. An instrument on the Indian Chandrayaan‐1 spacecraft mapped out this anomaly - called a mini magnetosphere - showing the area of deflection is about 360 km wide, and solar wind material that was deflected caused the surrounding ring of excess hydrogen atoms. When I learned of this discovery I was excited, thinking that the reduction of solar wind bombardment would slow down or prevent the darkening of ray material - as supposedly happened to form Reiner Gamma. But looking at the high Sun Clementine at top right, and other high Sun images from Zond spacecraft gives no evidence of a cluster of rayed craters. Too bad, it would have been a great story.