Difference between revisions of "August 8, 2009" 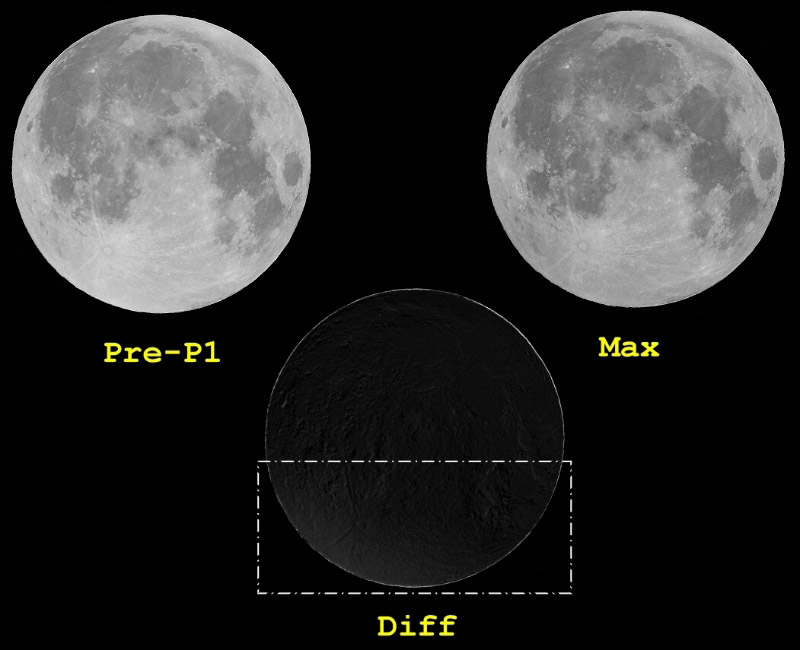 Partial penumbral eclipses are generally ignored since they are considered as ho-hum due to the virtually undetectable difference in brightness caused by Earth's penumbral shadow. However, something which may not be perceivable by the eye can often be a trivial case for a (sensitive) camera and which takes a no prisoners approach. Here is an image comprised of August 6's full Moon just before its entry into the penumbra ("Pre-P1"), the full Moon at its maximum penumbral position ("Max") as well as a third image of the full Moon comprised of the difference (ie. "Diff"). The latter is really the change in the Moon's brightness owing to its entry into the penumbra and, as you can see, this particular eclipse was comprised of a partial entry into the penumbra by a portion of the Moon's southern hemisphere. In order not to bias this analysis in any way, the camera was set to RAW mode so that the images written to the memory card would be untouched by the camera's on-board software (typical of images saved in JPG format). Also, exposure settings such as sensitivity (ISO), exposure length, white balance etc were kept identical for the image at "P1" and "Max". My "Pre-C1" image was taken four minutes prior to the predicted first contact of the moon with the penumbra. I do not know if it would have been better to capture this baseline image much earlier (ex. an hour) as a precautionary measure.

NOTE: I was astonished to receive two submissions showing difference images from in and out of a penumbral eclipse. Yesterday's LPOD was the other image. If you stretch Anthony's Diff image it looks very much like Filipe's.
Chuck Wood

Related Links
More about this image at Anthony's website