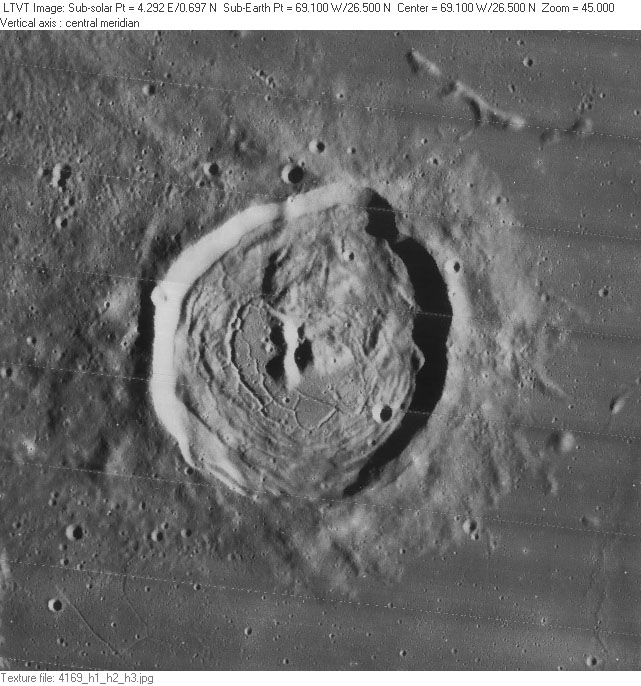 Briggs is a modest crater stuck on the edge of the Astrophysicists' Graveyard. The 37 km diameter crater is far enough from the lunar central meridian that mostly from Earth we see a shallow interior with a central peak. The best Earth-based shot I know of is the one in the Graveyard LPOD. But from overhead in orbit, Briggs has a lot of history to tell. Its rim is fairly sharp and continuous so it is a relatively young crater, although it has been partially surrounded by Procellarum lavas. Brigg's interior is not deep with terraces leading down to a flat-floor. The crater lacks terraces except for a hint of them on its south rim, and its floor is wreathed by ridges that give way to a dense circular network of rilles. The southern half of the inner floor is smooth, but it is not mare lavas because its not dark at full Moon. The shallow floor, concentric rilles, and location near a mare all qualify Briggs as a floor-fractured crater. But what is especially interesting is that the northern third of the floor is covered by a fan of debris that has slid inward from a noticeable wall scallup. The edge of the debris is clearly visible and it covers the concentric rilles. This means that the little notch on the northern side of Briggs' rim formed after the floor-fracturing. Unfortunately, we don't know how long after the formation of the crater that the fracturing occurred. But it is easily possible that it was millions of years later. If so, the northern rim collapse notch was not created during the formation of the crater. This suggests that significant rim modifications might occur long after craters form.