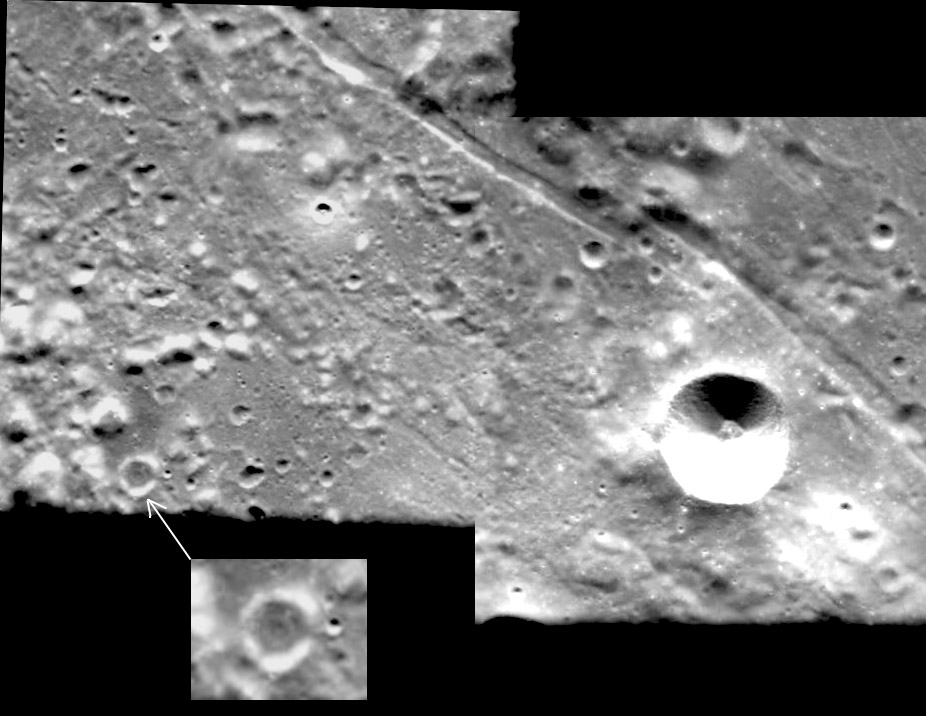 The latest SMART-1 image, acquired six months ago, is of a somewhat non-descript area north of Mersenius. The Mersenius I Rille passes near the 14 km wide crater Mersenius C. As I looked at the press release, desparate for something for LPOD today, I spied at the left corner of the image a small and subtle donut within a bright rimmed crater. I thought, Wahoo! There is an unknown concentric crater! I quickly checked my 1978 catalog of concentric craters (CC) and said, Oh shoot! I already discovered that CC! But as I looked closely at my nearly 30 year old list, I saw that #36, Mersinus M, is about 3 degrees away, on the floor of Mersenius. Quickly checking the Lunar Orbiter IV image for Mersenius M, I realized that this CC was unknown until this evening! This new CC has a diameter of 3.8 km, with an inner ring 1.7 km wide. Only two of the 51 known CC are smaller than this new one. The bright outer crater rim is incomplete with two or three low spots. By contrast, the inner donut seems complete and has a tiny central peak. The difference in rim completeness suggests that the donut might be younger than the main crater rim. If this is really true - and I am not sure it is - it would mean that the donut was not part of the crater formation process. I think that the main crater is a standard, somewhat battered impact, but I still don’t know if the donut formed by beautifully symmetric slumping of material off the inner walls, or if the donut is a volcanic ring. Still, it a nice way to end the evening - finding a new feature on the Moon and finally finishing the daily LPOD!

Now you can support searching for CC when you buy any book from Amazon thru LPOD!