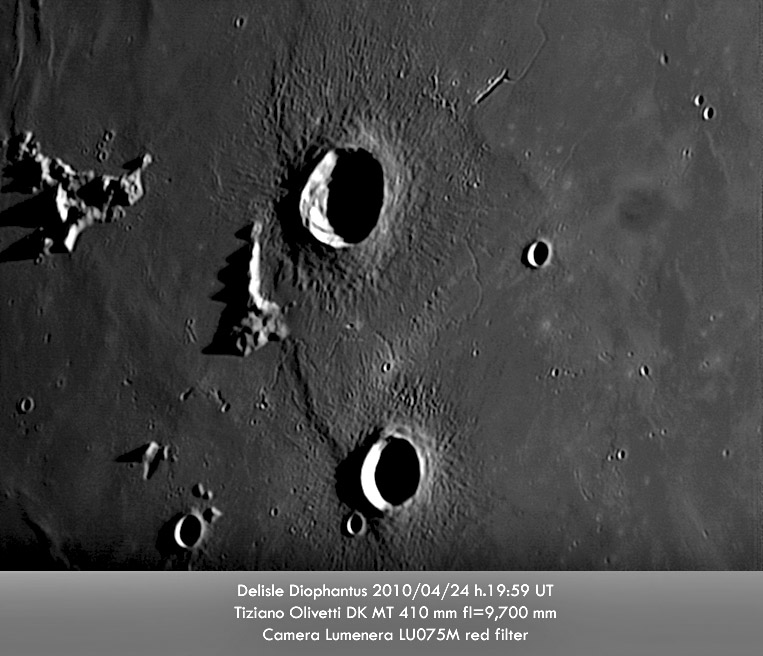 This is the second best image of Diopantus, Delisle and their rilles that I know of. But coming in second to an Apollo 15 Metric photo is high praise. Tiziano's wonderful image shows two different types of features remarkably well: ejecta and rilles. Both Delisle (big crater) and Diophantus formed on top of the mare lavas, as shown by their ridges and furrows of continuous ejecta that extend about a crater diameter beyond each rim. I became aware of another way to characterize such close ejecta deposits when looking at the very low Sun topographic simulations that show Copernicus and other large fresh craters to be surrounded by strong variations in small scale topographic roughness. Notice also that Delisle Mountain blocked the westward movement of crater ejecta, showing again that some ejecta follows very low - ground-hugging? - trajectories. The Delisle Rille is another example of rilles starting at elongated rimless trenches, in this case, cutting through the near-end edge like an after thought. The trench is probably a collapse over the vent area where the magma from depth breached the surface. If it is like similar vents in Hawaii it probably is on a very slight rise and may have a low spatter rampart that contained a liquid lava lake, that ultimately drained through the rille. The Diophantus Rille that runs between Delisle and Diophantus has no obvious beginning point, but the series of small rimless depressions near the west end suggests that end might be near the vent. And the LTO map supports this by indicating that the downhill direction is to the east, toward the center of the Imbrium Basin.

Related Links
Rükl plate 10
How wide is the Diophantus Rille?


Yesterday's LPOD: No Difference in Rays