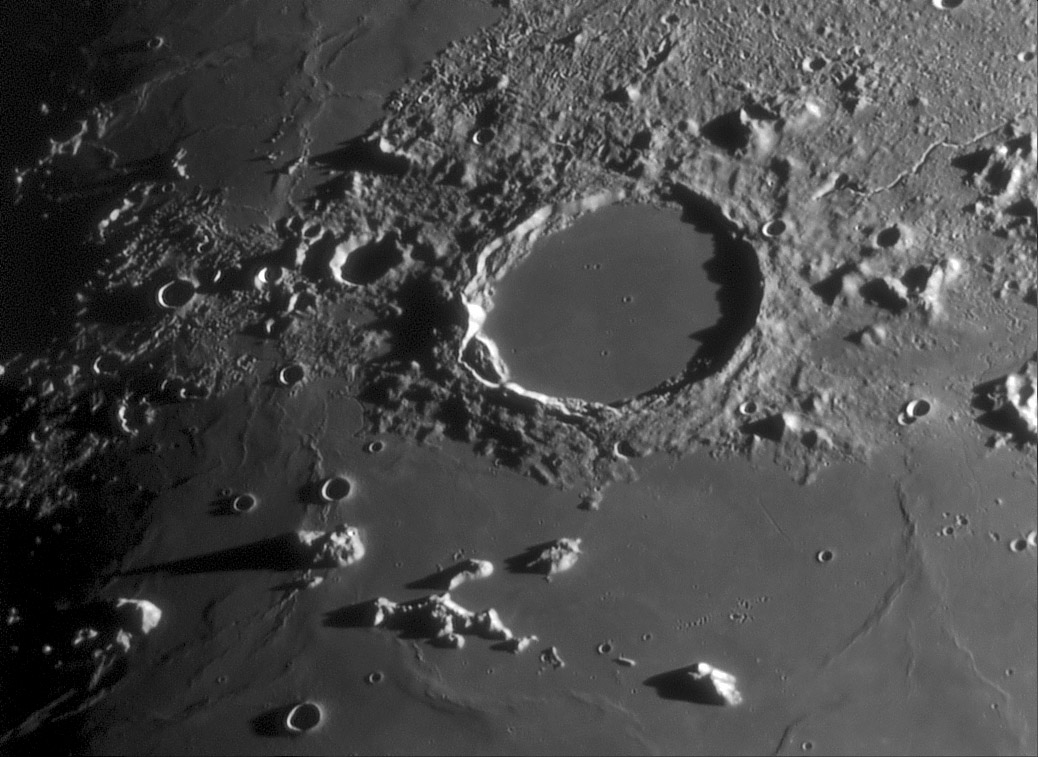 Newton is the name Schröter gave to the area enclosed by a curved mare ridge and a few bold mountains that define a large oval just south of Plato. Sometime in the last 100-150 years it become known informally as Ancient Newton because Beer and Madler moved the name Newton to a feature near the South Pole. I don't know if Schröter interpreted the feature but it is widely considered to be a ruin of a crater about the size of Plato whose walls were largely destroyed and the floor filled in by Imbrium lavas. I've written that myself in various places. It might be true, but I have questions about how it occurred. There are some lunar features that are obviously old craters that now are just arcs of rims with other parts largely missing - the Opelt-Gould chain provides examples. The curved mare ridges of Ancient Thebit, the large crater that holds the Straight Wall is another example. But these and most other mare ruined craters differ from Ancient Newton in having substantial continuous arcs of crater walls. The difficult thing to explain about Ancient Newton is how the only two parts of the western rim, Pico and an unnamed peak to the northwest, are 2.3 and 1.5 km high and the rest of the rim is at most about 100 meters high. Did mare lavas somehow destroy the rest of a 1.5 to 2 km high rim? If so, how? The lavas could not have buried the missing rim parts because the mare surface would have to be much higher than it is. Was Ancient Newton strongly tilted down to the east so the rim there was lower and easier to cover/destroy? If so, what happened to the missing rim between Pico and the northwest peak? Does a moving lava flow have the force to bulldoze down a rim, totally removing it? On both Earth and Moon lava flows are commonly diverted by obstacles they can't flow over, so I'd answer that last question with a, Probably not. Perhaps our perception of Ancient Newton is incorrect, our eyes and mind being fooled by accidents of topography. The curved mare ridge connects with others that strikes off to the south. Both Pico and the other peak seem to be parts of the Teneriffe Mountains, which obviously aren't part of a crater rim (but may be part of an Imbrium Basin inner ring). Should we say goodbye to Ancient Newton?

Chuck Wood
PS - turns out that I have made these observations before, and more elegantly. Its a sign of senility to unknowingly repeat oneself.