A Comet and a Butterfly 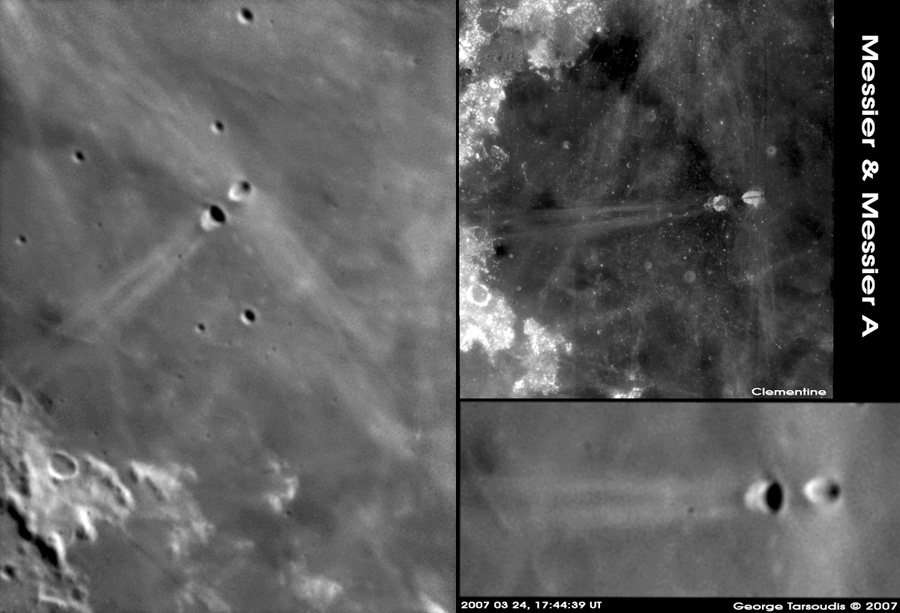 The rays of Messier and Messier A are very strange. “A” is the western-most of the odd twosome, with Messier itself being the more elliptical crater on the right. The two rays from “A” stream westward in a slightly widening fan. Many people don’t realize that Messier also has rays, they are less conspicuous but equally strange - spreading to the north and south, perpendicular to “A’s” rays. George says that one ray pair is like a comet train and the other is like a butterfly. That is such a fitting description of Messier’s rays that it is the term that the scientists who duplicated them in experiments called them. The butterfly and the comet train rays are the strongest proof for the laboratory conclusion that both Messier and “A” formed from a very low angle oblique impact. The space projectile came in from the east, only 3-5° above Mare Fecunditatis. It had such a westward momentum that it made a very elongated crater (Messier) and ricocheted further west and made “A”. Such ricocheting occurs in the lab experiments, as do the telltale perpendicular rays. One feature that is not well-explained is the apparent lip of another crater sticking out to the west under Messier A. It has been suggested that the lip was a pre-existing crater that just happened to be in the way. But that violates Occam’s razer which is that the simplest solution is often the best one. Since the lip is exactly inline with Messier and A, I assume it was formed with them as part of the very oblique impact. To find out more, read the interesting article in Selenology Today issue 5.